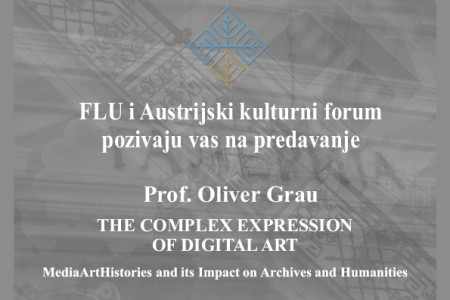 Oliver GRAU was appointed first Chair Professor for Image Science in
the German speaking countries at the Department for Image Science at
DanubeU in 2005. He has received several awards and his publications are
translated in 13 languages. Grau’s book “Virtual Art”, 2003 is
internationally the most quoted art history monography of the last
decade (H-Index). Other publications: Mediale Emotionen (2005),
MediaArtHistories (2007, Imagery in the 21st Century, 2011. His main
research is in the history of media art, immersive images, emotion and
immersion, the history of telepresence and artificial life and digital
humanities.

Grau gave keynotes at conferences worldwide, including the Olympic
Games and the G-20 Summit and was founding director of the
MediaArtHistories Conference Series. He conceived new scientific tools
for image science, a.o. the first international archive for digital art
(ADA, since 1999) www.digitalartarchive.at
Since 2005 Grau is also head of the Goettweig’s Graphic Print archive
www.gssg.at Grau is editorial board member of international journals.
2001 he was among the first elected members of the Berlin-Brandenburg
Academy of Science. 2014 he received a doctor h.c.

Digital technologies and devices have modified and transmitted the way we perceive and interact with images. In the humanistic tradition, Digital Art opens up thinking spaces of reflection substantial contemporary discussions, challenges, dangers, and proposed transformations of our lives in relation to the digital era. It has the unique capability to address the digital challenges of our complex times within the very medium that shapes them, whereas traditional art media can principally offer metaphorical approaches. Thus, Digital Art is the art form with the most comprehensive potential of visualisation of our information societies, thematising globalization, media and image revolution, ecological crises, surveillance, virtualisation of global finance, and societal norms and aesthetics regarding the human body. As multifarious and complex as these phenomena are and as diverse as Digital Art itself is, it takes highly disparate forms, like time-based installation art, telepresence art, genetic and bio art, robotic or net art.

The lecture will discuss digital artworks by Jeffry SHAW, Eduardo KAC, Christa SOMMERER, Tom CORBY, William KENTRIDGE, Maurice BENAYOUN, Paolo CIRIO, Victoria VESNA and others. But due to the imminent problems of archiving, the digital arts are threatened by its LOSS – a problem that is reinforced by the insufficient practices of cultural institutions to display, collect and research digital art. Post-industrial societies require digital arts based on contemporary media dispositives to reflect upon current and future challenges, just like art history was always informed by its contemporary media technologies. By establishing concerted international strategies and new scientific tools it is the aim to put media art histories on a contemporary basis in order to enable the humanities to meet with its (current) responsibilities.